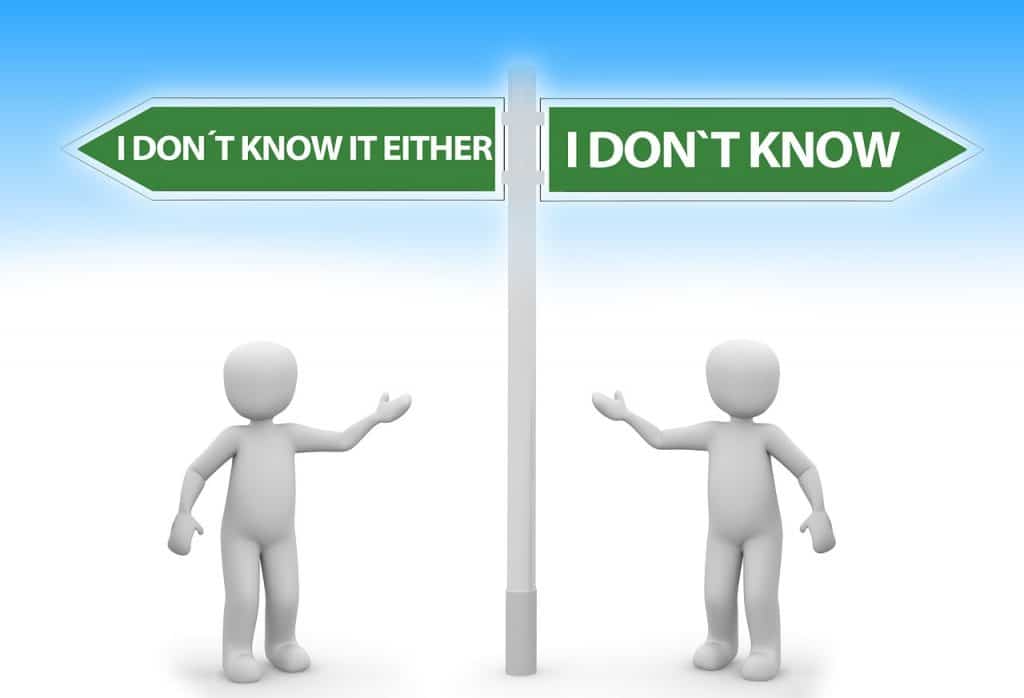 Are you someone who wants to learn more about why you believe certain things? Well, these ignorance quotes will help open your mind to new possibilities. Everyone has curiosities and were born into places and situations that isolate them from various realities. But, we all have a responsibility to learn and grow, no matter what we’ve been taught or not taught.

A Bit About Ignorance Quotes

Ignorance quotes are designed to enlighten you about the unknown. Some people need to be reminded that a lack of understanding should never be a reason accept things that aren’t true. Everyone has the ability to learn about things that are foreign to them, so that they can better understand the people and the world around them. We hope that after you read this list that it prompts you to resolve your curiosity. Do research, watch YouTube videos or whatever it takes to get the insight that you need. 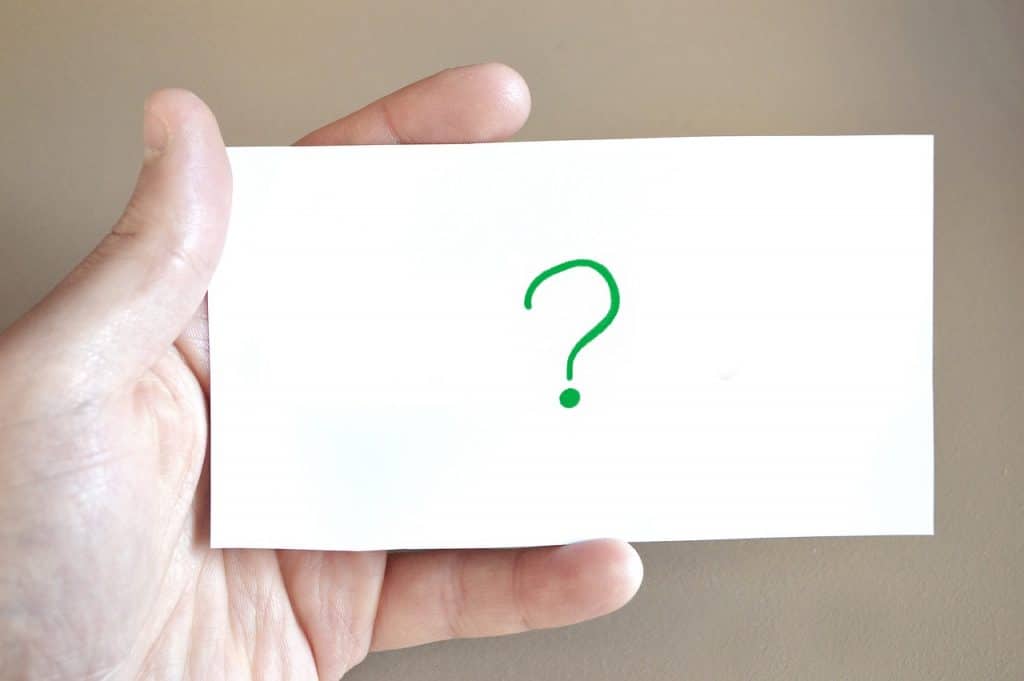 Why is important to understand ignorance?

Some people don’t know when they’re ignorant about something. They have their ideas about what’s right or wrong, and a lot of times their perception is not the truth. You might struggle with this, and honestly, everyone does. But, it’s important to recognize your ignorance so that you don’t push false ideas on others or create an issue based on your own fraudulent ideas. If more people would make the decision to enlighten themselves about things that are not educated about, society would be 10x better.

What can you learn from ignorance quotes?

Ignorance quotes can teach you how important knowledge is. They say that no matter how old you get, you won’t ever stop learning. As long as you live, you will always discover things you didn’t know. But more importantly, you should seek to learn about things you don’t know. This list is full of wise words from people who fully understand how problematic it is to be ignorant and stay ignorant. Hopefully, these quotes will open your eyes to new discoveries about yourself and the way you think.

If you’re ready to open your heart and mind to something new, just keep reading.

1. “Beware of false knowledge; it is more dangerous than ignorance.” –  George Bernard Shaw 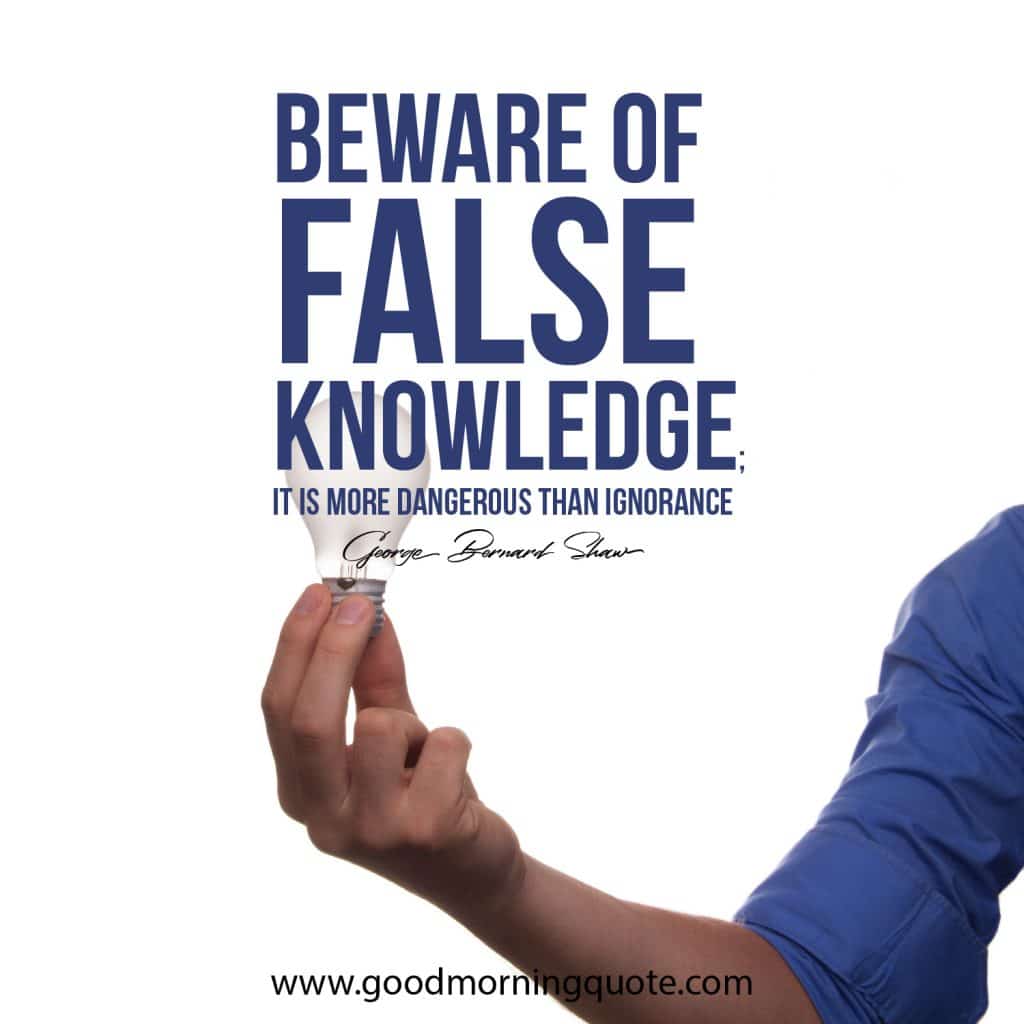 Have you ever been around someone who’s a know-it-all? It’s truly frightening to hear a person go on and on about something with a mindset that they’re right. But you’d be surprised how many people spread false knowledge without researching the topic. People will read or hear something that another person said and never fact check the information. Instead, they take whatever they heard as truth and spread it to others as well. Unfortunately, when this happens, it creates a false narrative that continues to pass on to others. Everyone should make it their business to learn about things before accepting them as truth.

2. “Ignorance is preferable to error; and he is less remote from the truth who believes nothing, than he who believes what is wrong.” -Thomas Jefferson 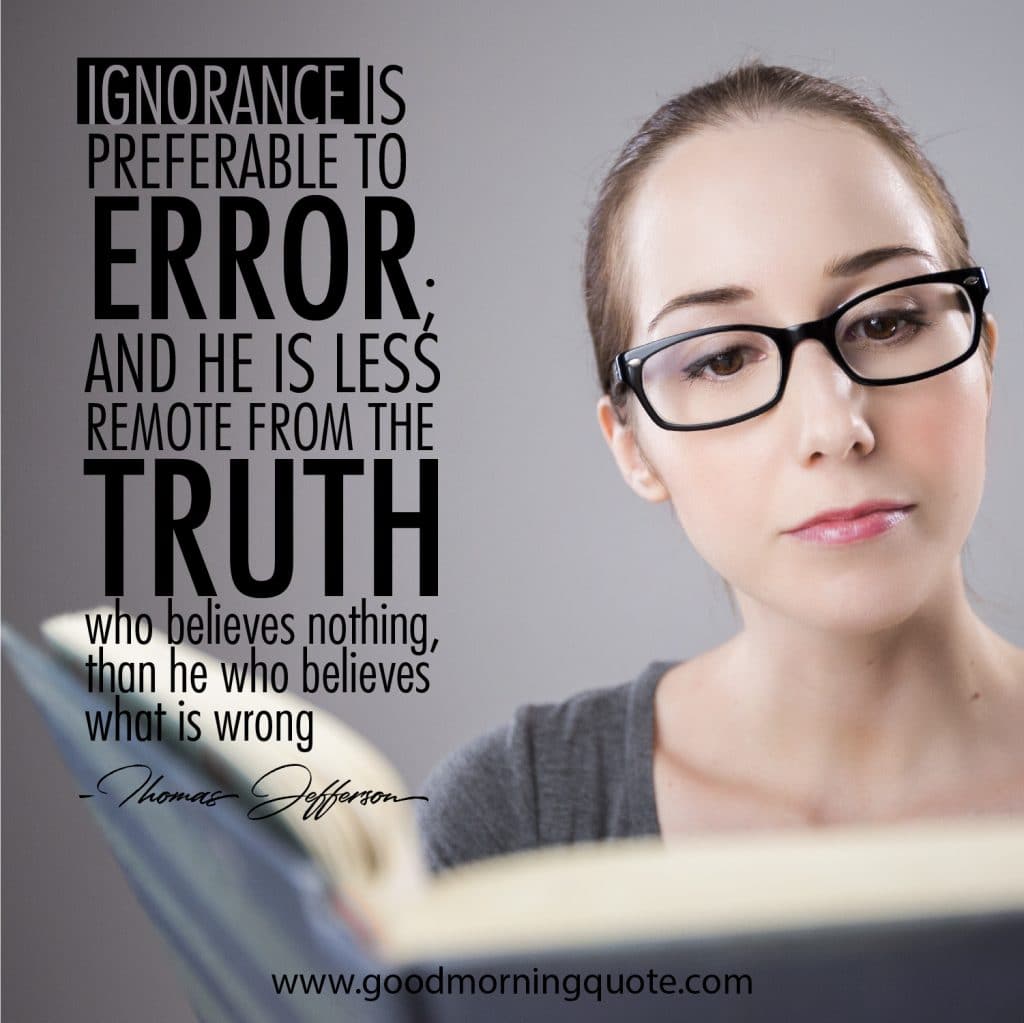 Thomas Jefferson’s words are powerful. What he is saying is it’s better for people not to believe anything, than to believe something that isn’t true. If you really dissect what he’s saying, that statement is profound. If you’re clueless about something, that’s one thing. You won’t cause too much of a stir about stuff that you’re blind to. However, believing something that is wrong creates a delusion, which can often lead to bad behavior, prejudice, and division amongst people. 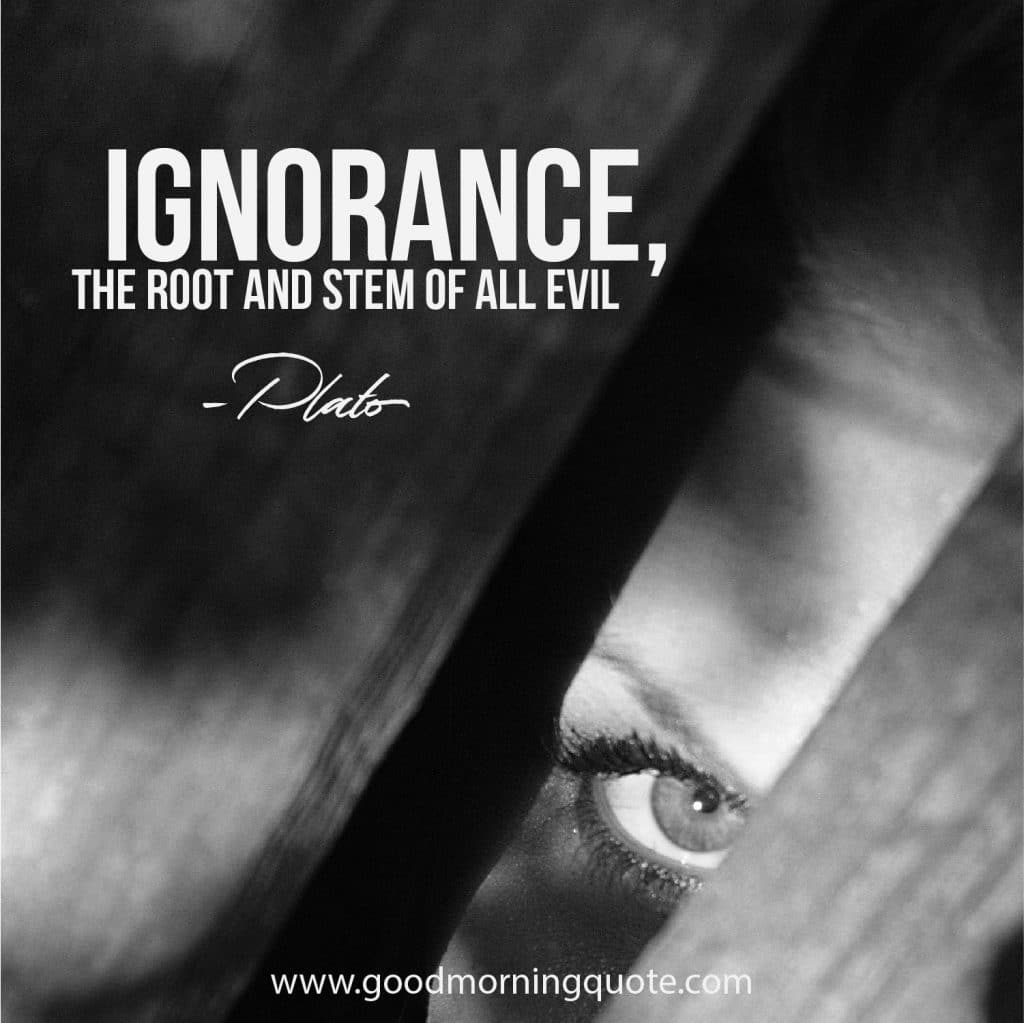 Ignorance is definitely the root of evil. If you think about anything bad that has happened, ignorance has played a part in. People have a tendency to use their warped sense of reality and use it to harm others. When it comes to things like racism, it’s based off a false perception of other races. And not only that, it’s fueled by fear; which is also a fictitious perspective of people who are different. However, not understanding something or someone isn’t an excuse to mistreat anyone. If you took time to get to know people for who they are, and not who think they are, the world would be much better.

4. “There is nothing more frightful than ignorance in action.” -Johann Wolfgang von Goethe 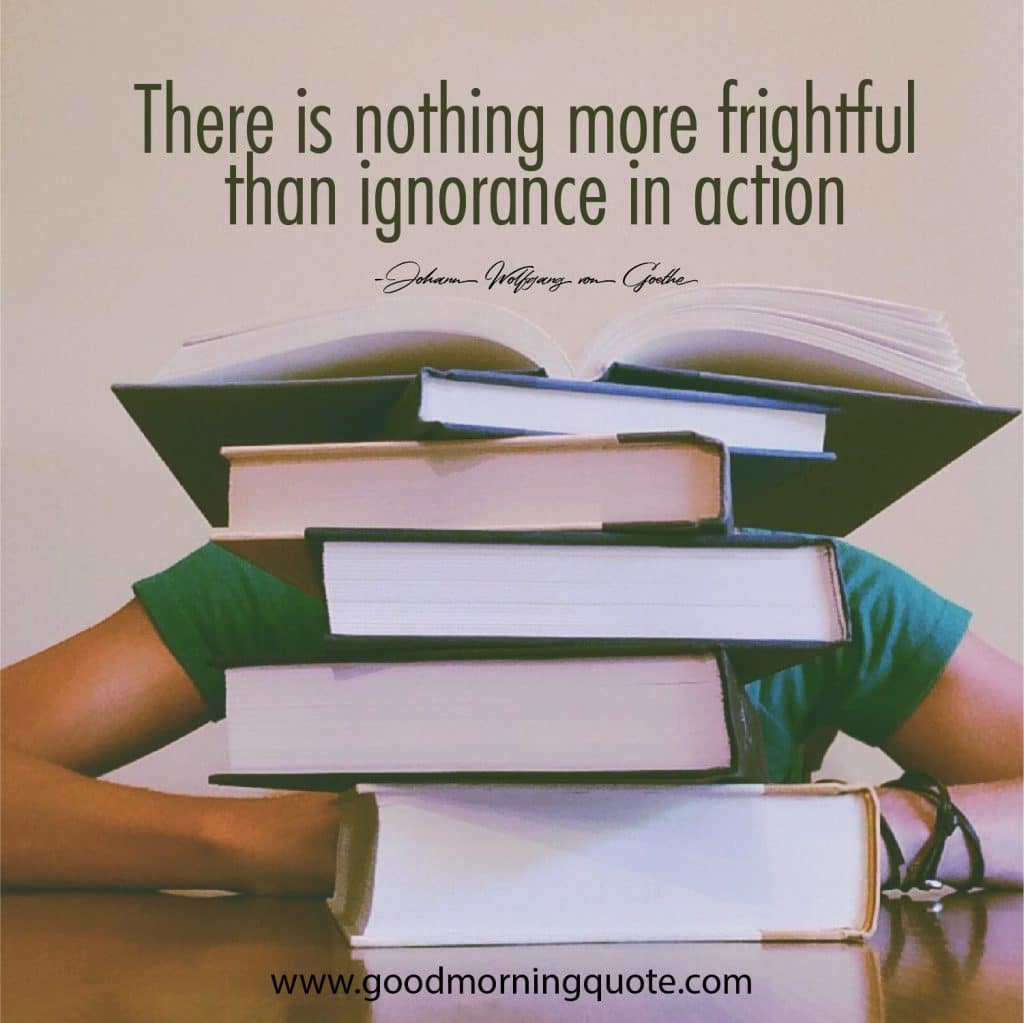 This is another one of those ignorance quotes that stresses the danger of ignorance. It’s never okay to force your truth on others and create division and hate based on distorted views. The world has seen this type of behavior throughout history, and sadly, it still continues. The best way to combat ignorance is through truth and love. 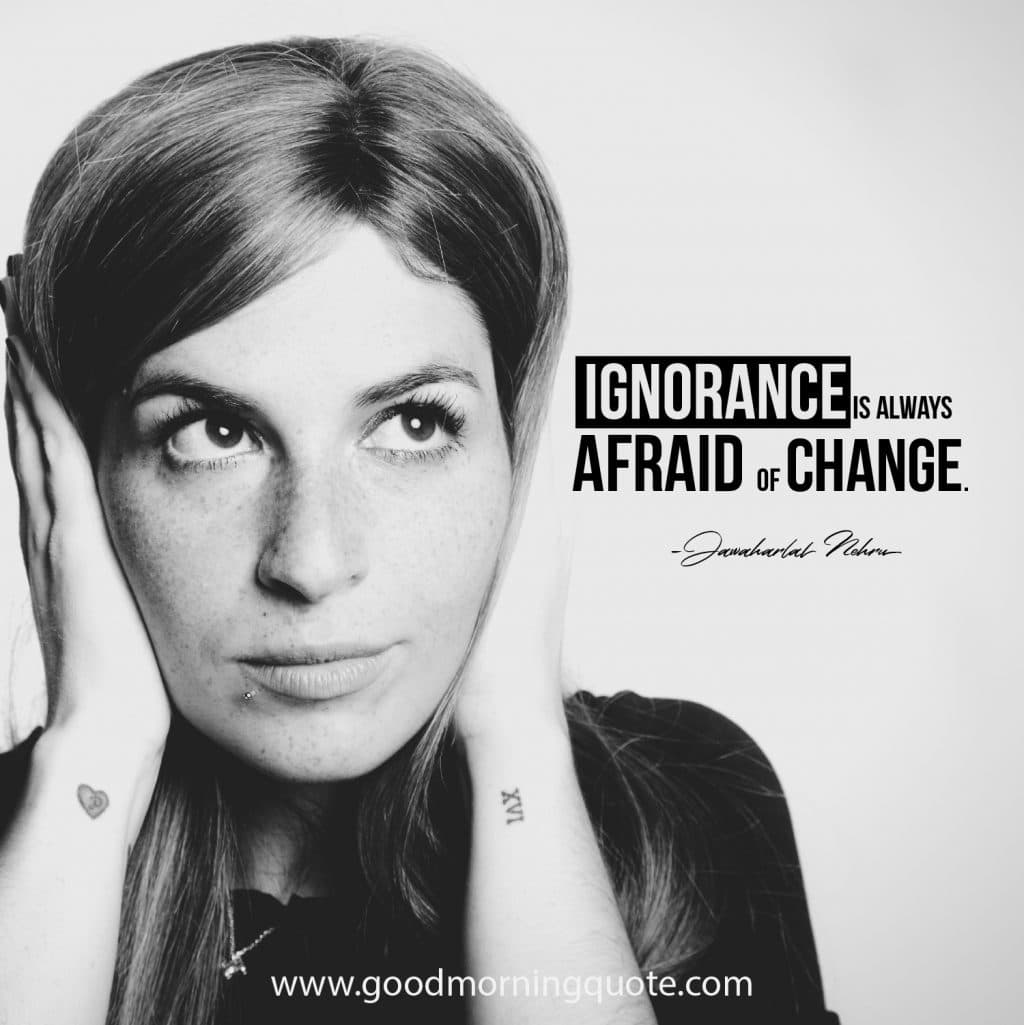 We can all agree that this statement is a mouth full. People get so comfortable in believing that they want to believe, that they resist anything different. But no one can evolve with old ways of thinking. The world would be such an underdeveloped place if it were full of people who refused to learn. Thankfully, there are those who have always questioned everything they’ve been told, and challenged the unknown. Everyone can take a lesson from scientists, professors, inventors, and philosophers who seek to understand the truth, rather than accept ignorance.

6. “Everybody is ignorant, only on different subjects.” -Will Rogers 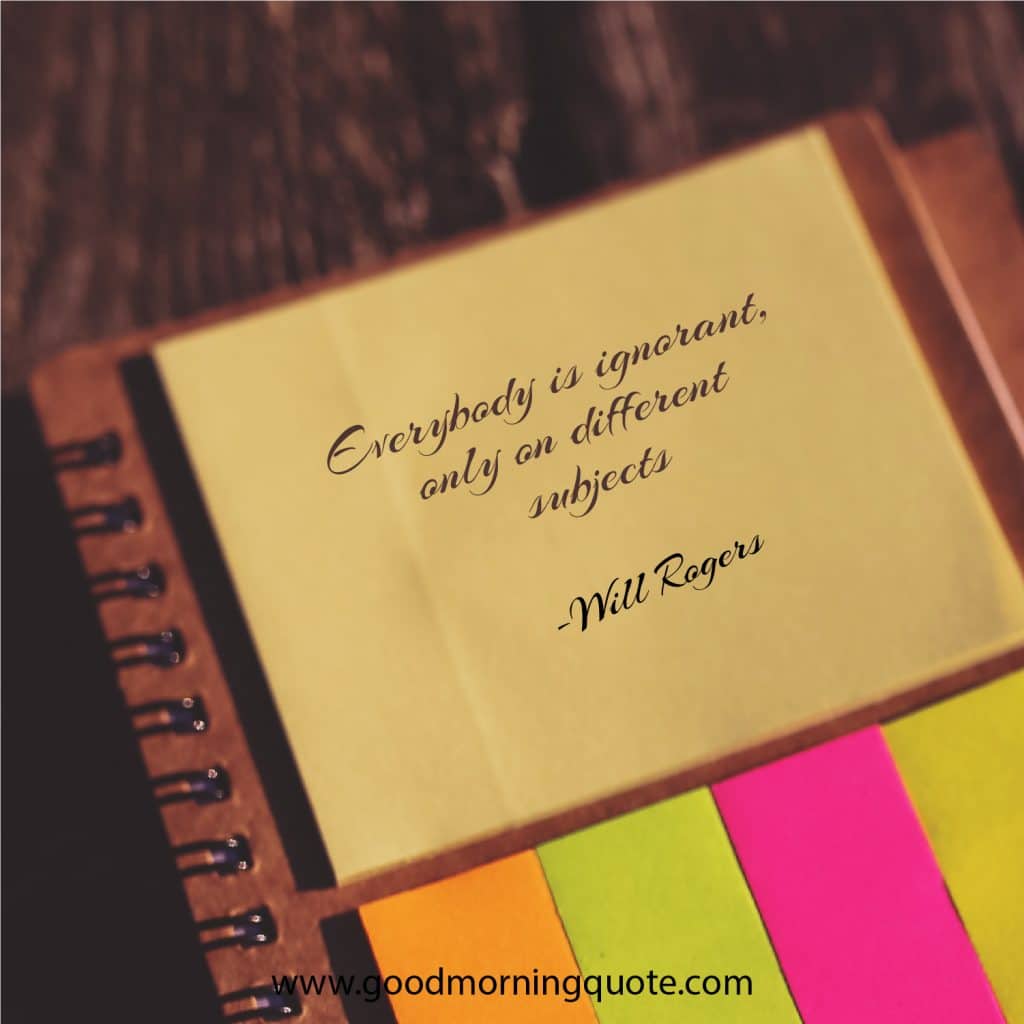 These ignorance quotes are not to bash anyone. Every person is guilty of ignorance, and no one is an expert on everything. However, as explained before, not understanding something isn’t a pass to resist against it. In today’s world, knowledge is plentiful. There are so many resources out there to help you learn about things you have no clue about. There are e-books, blogs, and even YouTube videos that give a personal look into a variety of situations. There’s nothing wrong with not knowing something, and being curious about it. The best solution to ignorance is knowledge. Get out there and learn everything you can.

7. “The highest form of ignorance is when you reject something you don’t know anything about.” -Wayne Dyer 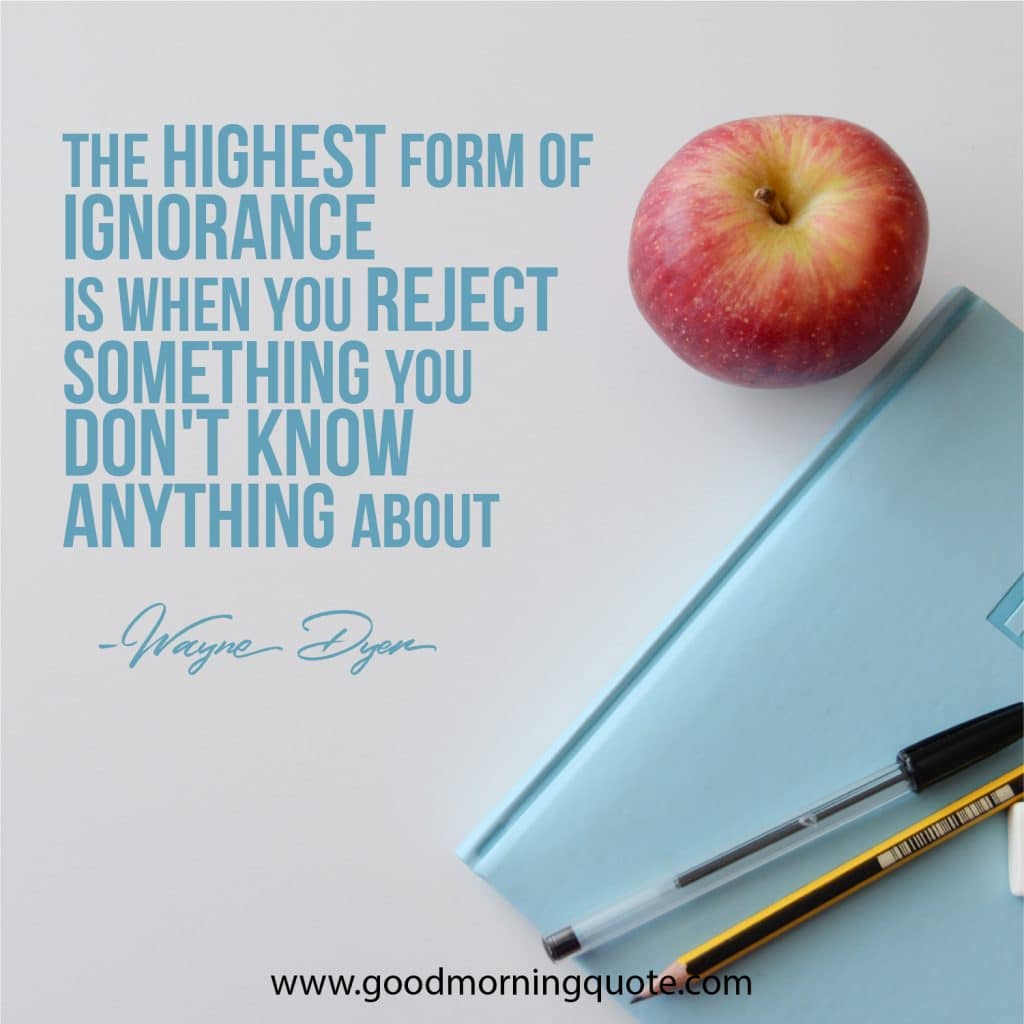 Out of all of the statements on this list of ignorance quotes, this one really hits home. It’s one thing to not be educated on something, but to reject it all together is foolish. Even if it goes against your morals or your way of thinking, it’s still a good idea to get educated on the matter. When you have better insight into why folks are a certain way or think certain things, you can be more tolerable. The problem is, most people refuse to have open conversations, which is harmful to all parties involved.

8. “The recipe for perpetual ignorance is: Be satisfied with your opinions and content with your knowledge.” -Elbert Hubbard 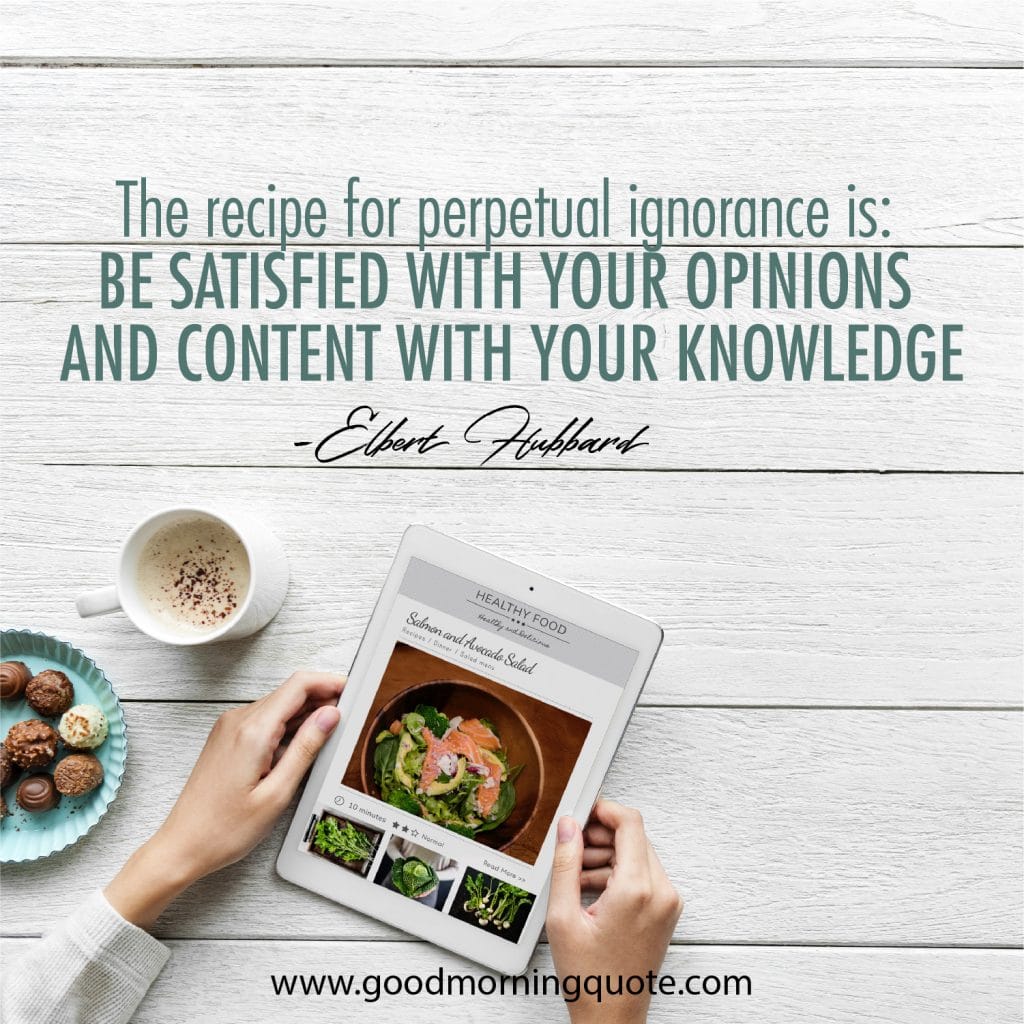 Listen, ignorance is one thing, but perpetual ignorance is an entirely different ball game. It’s incredibly damaging to yourself and others to continue to believe inaccurate truths just because it makes you feel comfortable. The reality is, there are some things you won’t agree with even after educating yourself, and that’s fine. But there’s no way anyone can evolve as a person if they stay complacent in their thoughts and outlook on the world.

9.“Being ignorant is not so much a shame as being unwilling to learn.”-Benjamin Franklin 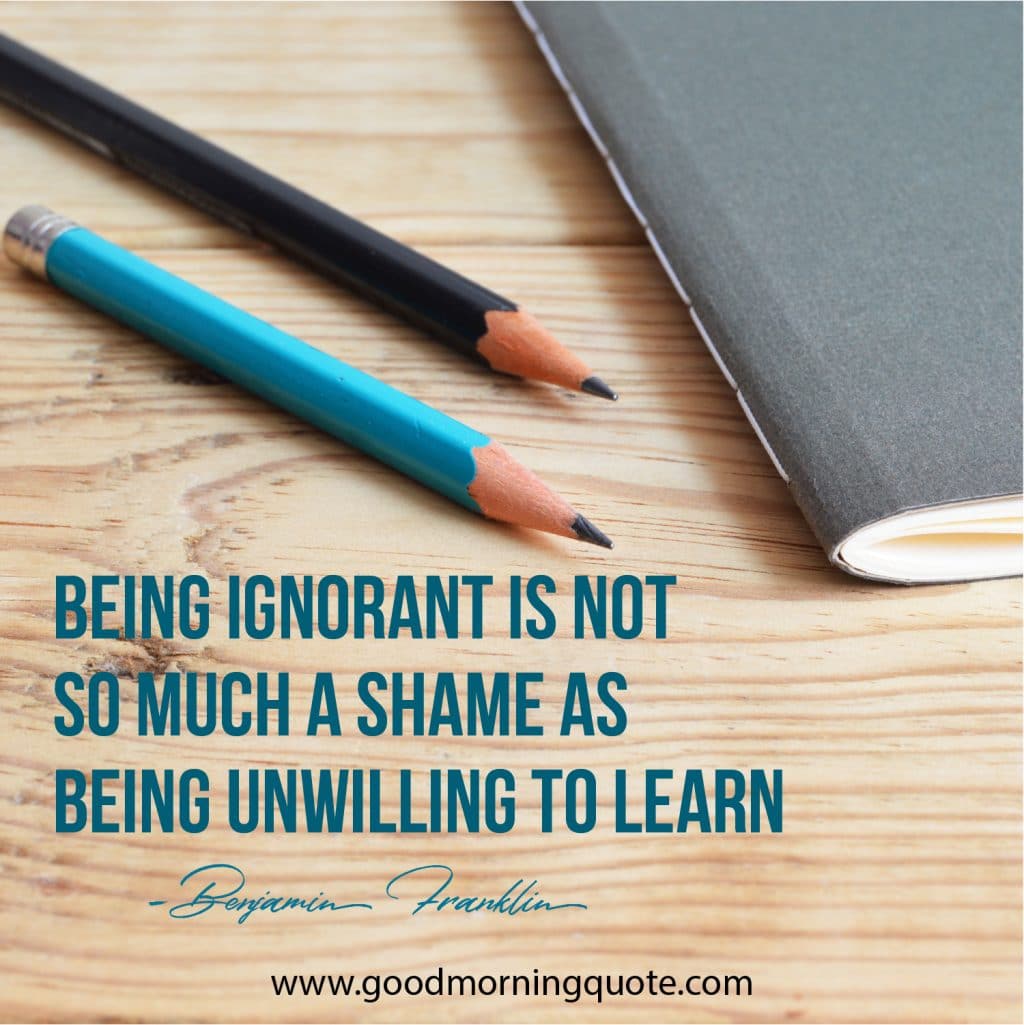 Again, no one is going to know everything. There are some things you will be clueless about, and that’s totally fine. The problem with it is when you are unwilling to learn something you have no idea about. It’s like saying you don’t like a particular food when you never tried it. You won’t eat it because it’s green or the texture looks funny. But until you taste it and experience it for yourself, you don’t actually have any real facts backing the way you feel. Well, that same philosophy applies to other things you’re unknowledgeable of.

10. “If ignorance is bliss, there should be more happy people.” -Victor Cousin 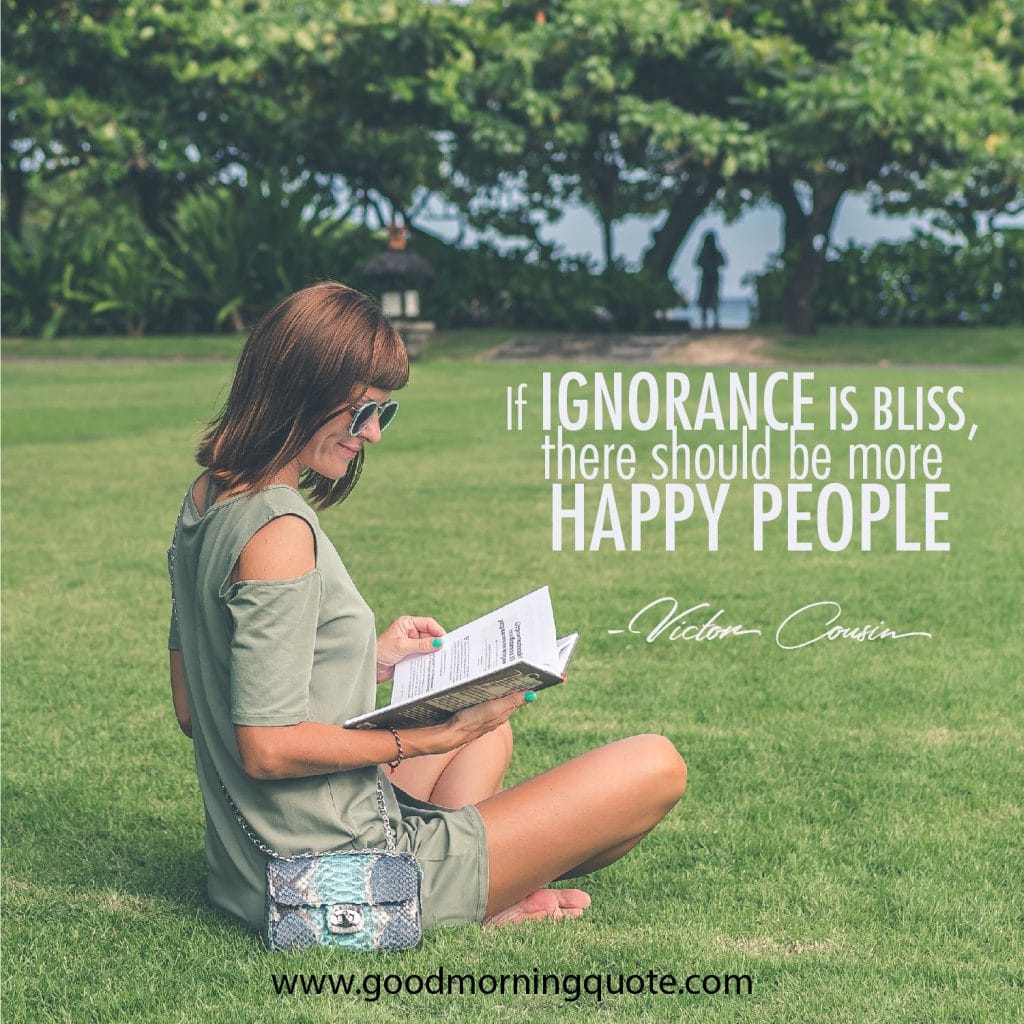 This is one of those ignorance quotes that will make you chuckle. Victor Cousin was definitely using lots of sarcasm when he used this statement, but it’s so true. From this perspective, it’s safe to stay the statement “ignorance is bliss” is false. You’d think that not being privy to something would be a recipe for love and harmony because no one knows much about what’s going on. Instead, it opens the door for hate, fear, and judgment; there’s nothing blissful about that. Therefore, ignorance should not be tolerated. If you don’t know or understand something, open your heart and mind to learn more about it.

Do you feel smarter after reading these ignorance quotes?

Did you enjoy reading these ignorance quotes? We put this list together to help you see that ignorance is not an excuse for bad behavior. It’s better to ask questions and get knowledge than to assume things. There’s nothing wrong with not being educated about something, but it’s never okay to create prejudices based off perception.

If you liked reading these ignorance quotes, please share it with your friends on social media and don’t forget to leave us a comment below! 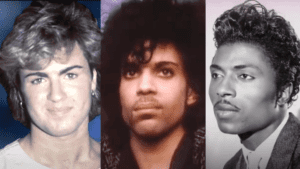 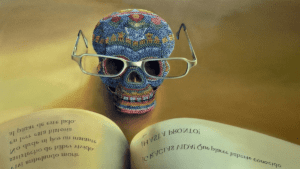 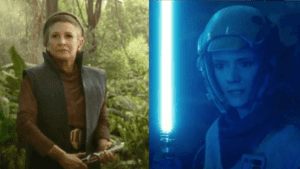 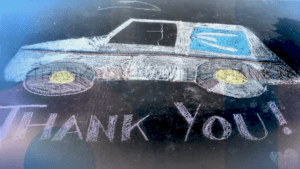